The Launch of the new Sony PlayStation 3 in Tokyo

Picture: The logo of the new Sony PlayStation 3


It's a cold night as the wind blows along the streets and alleyways of Akihabara, Japanese Customers line up in Akihabara, the home of otaku (geeks) and maid cafes. Eager fans line up silently to get their hands on one of the most sought after new technologies available, PlayStation 3 or commonly known as PS3.


The fans were wanting to get access to the key features of the new console namely: the online gaming service, called the PlayStation Network, its connectivity with other PlayStation products, the Blu-ray Disc with its larger storage Hard Disk Drive with its superior quality and it's range of multimedia capabilities such as playing CD's and DVD's, you can listen to music saved on your USB by just plugging it in to listen and 7.1 surround sound.


I work in Akihabara and as Yodobashi Camera is right above the subway station exits it is hard to miss what is going on at the store. The long lines of hundreds of fans (mostly men in their twenties) all huddled together and with plenty of supplies, (fold up chairs, blankets, thermos's and food) was hard to miss. As I walked along the line and spoke to people lining up, all agreed that even though it was cold outside they didn't mind the wait. To them this was 'history' in the making. For me it was special to see the dedication of fans toward Sony and to see the excitement about a new product launch in winter type conditions. On another level the launch was important as the product was first launched in Japan and then in North America seven days later. Also the versions available in Japan are different than those sold overseas (20GB and 60GB) and two colour choices (black and silver) models. 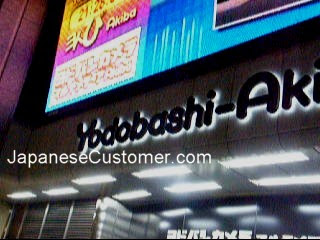 
From 3pm today at all of the three main entrances to Yodobashi Camera, Akihabara store, Tokyo's largest electrical retail store, eager young fans, in the early teens to middle age, lined up neatly close to each entrance in order to have the chance to be one of the first to get their hands on the latest game system from Sony. By 9pm the lines had grown twenty fold and the lines had gone from single file to eight people deep.

Security guards employed by the store had loud hailers and were trying to co-ordinate the huge crowd that had formed.

Of particular concern was the line at the main entrance from Showa dori that leads to the entrance to the Japan Railways station entrance, a long line made up of customers ten deep of gamers had virtually blocked off the entrance to the station. 'Salarymen' and local office workers were unable to pass and had to look for another way to get home after a long day at work.

The cool autumn evening temperatures didn't impact the excitement of the gamers who had prepared well for the long wait. Inside the store on the sixth floor, a PlayStation 3 display booth had been set up whereby gamers could play and use the new system. It was so crowded that you couldn't fall over if you fell.

Three large screen plasma television monitors had been set up in one corner of the store. A range of games was available and many people stood in awe, mouths open and motionless as they watched keen gamers try their hand at some of the new games. Certainly the graphics were the first noticeable improvements on the previous system. The lifelike scenery and human likeness was certainly eerie.

Store staff rushed hurriedly to unpack the large array of boxes in storage that held the new range of games and the units themselves. Ever so politely with bows and polite phrases they pushed passed customers to get their job done with the time slowly counting down to the launch. When the doors opened at midnight consumers raced to the displays and proudly claimed their new prize.